My Success with MMF - By Anthony Heard

My Success with MMF 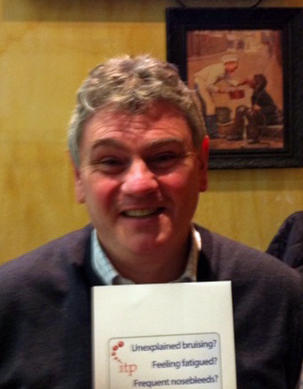 As I approach my thirteenth ITP Birthday on July 28th, I can reflect upon plenty of incidents during ITP years. It hasn’t been a picnic by any means. I have been through the Prednisolone ringer five times, Rituximab twice and a horrible week or so with Azathioprine (I could not tolerate it all and withdrew from it within ten days).

I am one of those ITP sufferers who have been fortunate to respond well to Prednisolone and Rituximab. With the steroid, I have obtained about 6 months remission every time that I went on it and with Rituximab, I got about 2 years and 8 months remission both times that I had it. But in February 2016, I relapsed from the Rituximab remission that I had enjoyed since Summer 2013.

So, at that point my specialist suggested that we try Mycophenolate Mofetil (MMF). He was reluctant for me to undergo a third round of Rituximab treatment. Although I had responded well to it twice already (2010 & 2013). He felt that the long-term damage that it could potentially do to my immune system was not worth the risk. More long stints with Prednisolone were also ruled out. Although I responded well to it, the problems that it caused every time that I had used it on 5 occasions already, would just not be bearable again.

Most ITP sufferers will be familiar with the horrible side effects that Prednisolone can sometimes inflict on the patient, so I will not dwell on them further here, suffice to say that I was not willing to put myself through them again. In addition to the wretched side effects, long term steroid usage is also damaging for us in several other ways, not least in weakening our joints and bones. So MMF seemed to be a very attractive option back in 2016.

For those not familiar with it, MMF like Prednisolone, Rituximab and Azathioprine is another immune suppressing drug which raises the platelet count by slowing down the destruction of platelets. It hopefully achieves this by suppressing the immune system and its' penchant for incorrectly attacking and destroying our platelets. It has the added benefit in most cases, of fewer nasty side effects.

As usual we must emphasise that we all respond differently to all these treatments and all encounter different side effects to varying degrees. MMF is a drug which is most commonly used by patients who have been given an organ transplant as it works to prevent any rejection of the new organ by the patients’ immune system.

A key point to make about MMF is that like Rituximab it can take 2 to 3 months to impact on the platelet count. So, I was put on a fairly low, yet gradually reducing dosage of Prednisolone initially, just to get my platelet level up and hold it whilst MMF was introduced. I reluctantly accepted that I’d have to go back on the steroid for what turned out to be six weeks. Once my platelet count was back to normal levels, MMF was introduced at a dosage of 750mg’s twice per day. It has subsequently been reduced to 500mg twice per day and that is my current dosage. I take no other drugs.

After six weeks of tapering down the steroid and getting MMF on board, my system responded well and since February 2016 MMF has been my constant companion. My platelets have settled at normal levels and even reached the low 200’s, quite regularly.  I could not be more delighted. The only side effects I get from MMF are a little nausea, usually first thing in the morning, but it is not too problematic. I don’t encounter any other issues at all.

Some ITP sufferers have had equally positive responses from MMF but as ever all I can say is that like all treatments, responses vary. I continue to have excellent platelet numbers, but I also keep a watchful eye out for any unprovoked bruises and am always wary about any signs of over tiredness. You have to keep a secret service like watch out for any ITP warning signs. That is the daily routine of any ITP sufferer, so nothing new there.

One very important thing to mention about MMF, is that like all immune suppressing drugs it does reduce our ability to fight off infections, viruses, bugs, colds, flu’s etc. So, we are more vulnerable to illness than we otherwise might be. Like any treatment, it is a matter of measuring risk versus reward in all these things. We have to weigh up the side effects, potential problems (both short and long term) against keeping our platelet levels as high as possible and at consistent levels.

A further thing to keep in mind about MMF is that it also makes us more vulnerable to skin cancer and therefore I always wear a hat in the sun and always use Factor 50 sunscreen lotion. It is common sense for anyone anyway, but when taking MMF it is a necessity.

As I approach my thirteenth ITP Birthday, I can definitely confirm that MMF is the drug that best suits me. I am aware that I will likely as not, always be taking MMF from now on. However, I am grateful and realise how fortunate that I am to have found a drug which maintains my platelets at normal levels, without any of the nasty side effects. I fully understand how tricky getting the right drug for each individual ITP sufferer can be. I went through 10 years of some pretty nasty times, but I am thankful to have come through them.